The Office of the Future Feels a Lot Like Your Home

The way that people work is changing, and so are their furnishings.

In the past decade or so, office design has begun to evolve in response to changes in how people work—especially in the way the boundaries between work and play are becoming more fluid.

Rachel Montana, senior design researcher at WeWork, says that means people want to personalize their workspace. They want to feel at home even when they’re at work.

“You want to exert your personality in all aspects of your life, to express more of who you are,” Montana said. “People work long hours—and being able to be in a comfortable space is important.”

WeWork has surveyed thousands of its members to find out exactly what they want from their workspace. Danish furniture design brand HAY — which shares WeWork vision of making good design accessible — used the results of the survey to create its version of the office of the future. It’s being unveiled this week at Milan Design Week.

The display uses pieces from a new modular shelving and storage system designed by Stefan Diez called New Order 2.0. It’s part of HAY’s installation at Palazzo Clerici, a 17th-century palace in the heart of Milan. HAY’s modern designs looked surprisingly at home in a room with soaring ceilings and intricate wood floors.

With minimal and tasteful Scandinavian design lines, the adaptive shelving and desk units can be stacked and modified to expand or contract depending on a user’s needs. Different inserts and panels address a range of issues, like acoustics and storage. 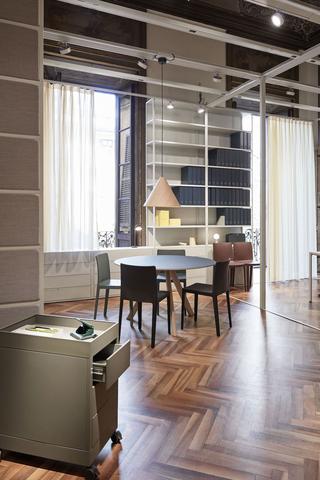 HAY’s installation at Palazzo Clerici, a 17th-century palace in the heart of Milan

“What you can slide into place has the possibility of being pretty endless, which is awesome,” said Nate Clark, director of object design and development at WeWork.

Though these subtle design lines and muted colors might seem easy to accomplish on the surface, Clark said it’s the opposite. Clark said his inner child is excited to make the most of office spaces with these “Tetris blocks” of furniture.

“What’s amazing about this from a product or industrial design point of view is, simpler and cleaner is 1,000 times harder,” he said. “It’s usually much easier to design something that’s clunkier or not as flexible. It’s really hard to create something this clean that can flex and bend.”

In 2017, WeWork began polling more than 4,000 of its members in 24 cities around the world. The data revealed telling details about work-life balance — or the lack thereof — and how that plays out across cultures. In Mexico City and Tel Aviv, for example, coworking members were more likely to eat out for lunch, while Americans tended to chow down at their desks and, therefore, needed space to store their food.

After seeing these findings, Montana joked, “We were like, ‘Man we need to encourage more Americans to get out of their offices.’”

U.S. workers were also more likely to store their gym clothes, merging one activity into the next. This reflects one of the largest overall shifts in the way people work, and it seems to be true across cultures: The boundaries between work and the rest of life are blurring.

Some things haven’t changed, though. Even in the digital era, more than 80 percent of the people polled still want a place to stash their pens, notebooks, and related items. HAY has incorporated these desires into its designs with drawers and pen holders.

Another holdover from traditional offices? The personalization of workspace is crucial, Montana and her team discovered. They found that members had pictures of family, friends, and animals wherever they could squeeze them in, even on glass walls.

“You could just look at your phone, but people still want to have that person or that animal out there — it’s just cute and nice,” Montana said.

Beyond just comfort, WeWork strives to create environments that make people enjoy going to work. In practice, that means cleaner lines, more comfortable seating, and more warmth than the gray cubicles of yore. Muted colors with the occasional pop of an accent color — on a pillow, for example — tend to excite people without overwhelming them.

“It needs to not be over-designed, but we want to bring in colors and textures that can energize people,” Clark explained.

HAY’s design aesthetics — with its natural color palette that calls to mind a misty beach in Copenhagen — mesh well with WeWork’s style.

“We love HAY because of their focus on color, creating spaces that are humanizing,” Clark said.

For WeWork, that means creating spaces where a company can continue to grow and evolve.

“We actually really believe in people making a life and not just a living — maybe that sounds like it’s a catchphrase, but it’s really true,” Clark said. “As we grow into the future, we’ll talk less about the separation from work and home and learning and working out. If you can create areas where these things are symbiotic and you can move flexibly through all the spaces, something special and cool can happen. That’s what exciting.”